The son of farmers, Peter Brook was brought up in West Yorkshire where he spent most of his life. He was educated at Barnsley Grammar School before moving on to teacher training at Goldsmiths College, part of London University, where he visited galleries and attended life drawing evening classes and further developed his art alongside his teaching career back in Yorkshire. On trips in the countryside with his art students he would tell them to use the same approach he used in his own painting: 'if you want a subject, look around you'.
Brook became a full-time artist in his 40s and in 1962 was elected a member of the Royal Society of British Artists. Agnews, the major London art dealers, began to represent Peter in the late 1960s and their first two shows of his work resulted in over 100 paintings being sold. Further shows in America and Australia followed. In 1974 he was commissioned to design the Oxford University Almanac. Actors Tom Courtney and James Mason were big collectors of his work at this time
The crumbling farmhouses on sheep-dotted moors sweeping into the distance, or people bustling round honey-stoned houses, faithfully observed by the man and his dog, always provided Brook with the subject matter he desired. While he painted elsewhere in the British Isles, he continued to return to the Yorkshire Pennines, often in snowy winters. These wonderful painted snow scenes are now highly collectable.
Although his subjects remained consistent, Brook continued to work on his technique and approach. Having started out using thick paint, he started to use the very sandstone he painted, crumbled to a fine dust and mixed with thinner paint to give more substance to his buildings. He was further inspired by the hazy effect of Victorian prints which led him to sometimes use rags, wire brushes or his fingers to conjure streaky clouds or smoky skies.
A dog's face peeking through a gap in a door, or a quirkily placed sheep bring humour to Brook's work, but the strength of his wit really comes through in the titles he inscribes along the bottom of his paintings. A revelatory comment or sometimes enigmatic description make the observer laugh or think and both provide a further dimension to the work and offer even more of the artist's insight into the scene.


Brook's impressions of the Yorkshire Pennines, moors, and mills seem deeply infused with the artist's personality. His intimate knowledge of the seasons, stark landscape and fading customs of his homeland, combined with his wit and varied, painterly touch make the paintings easily recognisable and instantly appealable.


He was a hugely successful artist during his lifetime and is now recognised as one of Yorkshire's greatest artist. His work is in the Tate Collection, The V & A, Wakefield Art Gallery, Leeds City Art Gallery, Leeds University & Spring Ram PLC and in major private collections throughout the world. A whole series of books were published about his during his lifetime plus two major books after he died. Peter Brook - A Life in Painting Vol I & II.

1973 - Agnew's exhibit his work in California.
Did a series of paintings in Scotland

1978 - Agnew's produce a series of Lithographs of paintings of months of the year.
Met Hannah Hauxwell.

1984 - Painted for Moores family in Trough of Bowland Lancashire.

1992 Published first book - Brook: The Pennine Landscape Painter - followed by others - In and Out of the Pennines Even - Peter Brook -An A to Z by Stuart Archer.
Retrospective exhibitions held at The Mall Galleries, London and Huddersfield Art Gallery.

2004 Broke a leg but carried on painting - produced the book, Abroad - but not going far'.
Annual exhibitions at the Old School House, Muker.

2009 - Exhibition of works in Public Collections
Painting selected by the Mellon Centre for British Art, University of Yale
Universities of Leeds, York and Birmingham. (at least 8 donated by Arthur Haigh) 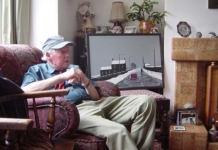 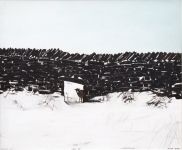 Footloose - In an up and coming Tourist Area 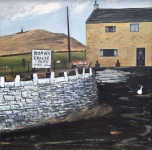 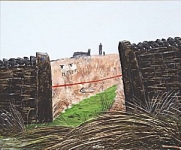 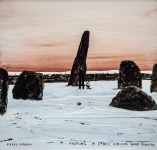 Visiting A Stone Circle Near Penrith 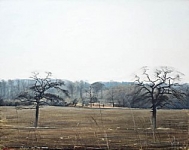 Walking Into The Woods - English Landscape With Two Trees 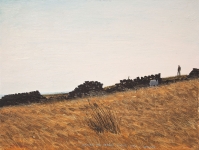 Walking the Bronte Moors with a Skylark 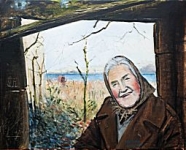 A Later Flight Passing over the Bronte Moors 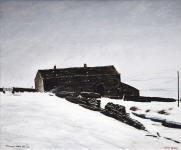 Dog On A Double Yellow 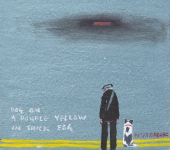 Dog On A Double Yellow In Thick Fog 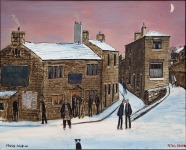 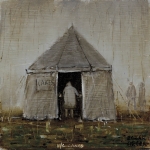 In The Woods - Training The Dog Again

Loch Shiel On A Sunday With Some Men In A Boat 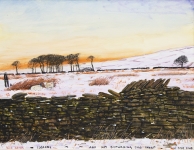 Looking and not Disturbing the Sheep, so Take Care 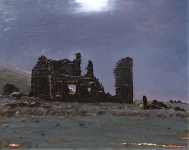 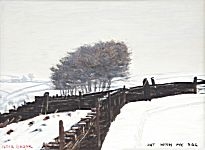 Out With My Dog 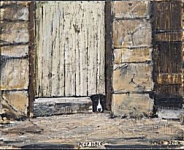 Pennine Cottages, Where The Weavers Once Was

Sheep Dog Pleased to be Noticed

Sheep Out In Rain And Mist 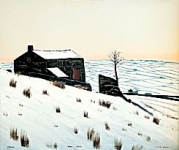 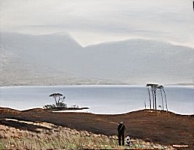 Stop - On The Way To Lochinver - To Look At This View 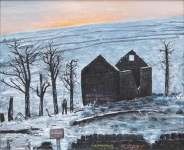 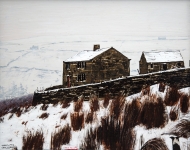 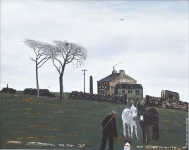 With Something for the Donkeys and Farmhouse Teas and Children Welcome