Harry Rutherford was born in Denton in 1903, and based for much of his life in Hyde.There are two Blue Plaques to local artist Harry Rutherford in Hyde. One is on his former home 17 Nelson Street where he lived, keeping a studio next door and there is a duplicate one on Hyde Town Hall. They celebrate this popular local artist who painted many local scenes but who also gained national recognition for his work.

Harry Rutherford has often been identified as one of the unsung heroes of the Lowry generation. A follower of Walter Sickert, Rutherford's work always demonstrates an uncanny knack of distilling the moment.

Harry Rutherford was born on Market Street in Denton in 1903 where his father, William, had a hatting business. William himself was a gifted amateur artist and with a group of friends had formed the Hyde Art Group. Harry found he had every encouragement from his father when he showed a talent for drawing. Harry later claimed that he was not gifted at anything except drawing although those who knew him may dispute this.

As a young boy Harry was often to be seen sketching the local beauty spots at Werneth Low. If he drew a tree, his father had to be able to recognise what kind it was!

There were three brothers, all talented men. Bob became a script writer, Donald a musician who, because of a weak heart, changed to repairing and tuning pianos, and George, the eldest, Harry described as a "born philosopher". Harry was always grateful that his brothers were so supportive of his work:-

"I have had three very remarkable brothers. I've been extremely fortunate in the choice of my brothers - extremely. No artist ever emerges without support from somebody, I can assure you, and they were always very kind."

During his childhood the family moved from Denton to New Mills then to Hadfield and then settled in Hyde at 17 Nelson Street. Harry's affection for his family home is clear as he nicknamed it "sweet seventeen".

While still at school Harry attended the Hyde School of Art on Saturday mornings. On leaving school aged fourteen he continued to develop his skills through evening classes at the Manchester School of Art. At these classes he met another artist who is also honoured with a Blue Plaque in Tameside, L.S. Lowry. Harry's recollection of Lowry reflects his own sense of humour:-

"He could draw feet very well. He was absolutely marvellous in the life class on feet - he was terrific."

Fortunately for Harry his first jobs helped to develop his artistic abilities. Employed first at Olivers in King Street, Manchester he learnt the trade of lithographic printers and illuminators becoming a good letterist. Then work at an interior designers who specialised in theatre work sparked a love of the world of the theatre which would remain with him throughout his life. He also had the opportunity to sketch the performers.

A succession of jobs with Manchester Art and Design studios followed. By the age of twenty two Harry was a very talented artist and illustrator.

The influence of Walter Sickert

At this time a strong influence came to bear on Harry's work. The renowned artist, Walter Sickert, came to Manchester in 1925 to open an art school at the invitation of a local art dealer. The class would be for thirty pupils and Harry was both the first and youngest to enrol.

Harry and Sickert became firm friends, a friendship enriched by a mutual love of the theatre which was the subject of both men's work. Sickert's influence on the technique of Harry was very strong.

Sickert was only able to stay in Manchester a few months as other commitments and projects drew him back to London. However, rather than disband the class he proposed that Harry should take it over. His faith in his ability to do so is evident:-

This is to say that I am satisfied with your ability to carry on my methods of teaching. You have got both the theory and the practice to my satisfaction, you are quite as fitted to impart them as I am.

Sickert also did Harry the great honour of describing him as "my intellectual heir and executor".

The classes thus continued throughout most of 1926 until domestic responsibilities for Harry forced him to end them. Similarly he had to decline a teaching position offered to him at Sickert's new art school in London in 1927.

During his association with Sickert, Harry was employed as Head Artist at Manchester advertising agency and was also producing topical cartoons for newspapers like the Manchester Evening News. The came an opportunity to move to Cornwall and devote more time to his own painting whilst doing some teaching. In these years his work became exceptionally confident and he developed his own style, distinct from that of Sickert. In 1930 his painting "Penzance" was accepted by the Royal Academy for their summer show.

Commissions came from the Duke of Devonshire at Chatsworth for whom Harry painted fine watercolours of the estate.

The next move was to London in 1931 where he freelanced on Fleet Street and his work appeared in numerous publications including "John Bull" and the "Listener".

The growth of television gave a new direction to Harry's career. His ability to sketch rapidly and accurately led to many television appearances in "Cabaret Cartoons" when he drew the performers in a variety show as they did their acts. In this broadcast Harry always remained silent - advised to keep his Lancashire accent to himself!

Cabaret Cartoons was a regular engagement for him from 1936-1939 until it was halted by the outbreak of the Second World War.

At Work in the War

Harry found his skills of value during the war. The Royal Air Force employed him to assist in their camouflage and torpedo attack training. He painted skies in exact detail onto micro slides which were then projected onto a screen to simulate flight.

Harry continued his own work but sadly much of it was destroyed when his Camden Town studio received a direct hit during an air raid.

A Return to Television

Cabaret Cartoons returned to the screen in 1946 and Harry worked with newcomers like Petula Clark and the Beverley Sisters.

From 1950-1956 he starred in his own series called "Sketchbook" for children's television. Local people may recall the sketches he made to illustrate Samuel Laycock's poem "Bowton's Yard" on television during this time.

Home to the North West

On returning to Hyde in the 1950s Harry taught painting at the Regional College of Art in Manchester until 1968.

In 1957 he spent some time in Borneo as guest of the Governor there and during which time the British Council organised two exhibitions of his work - the first exhibitions of Western art ever held in that country.

In 1961 Harry was honoured by being elected President of the Manchester Academy, a post he held for eight years and during which he worked hard to extend the activities of the Academy.

He continued to paint and had a studio adjoining the house on Nelson Street which he now shared with his brother Donald, his cat Sugden, and an ever-increasing collection of hats which lived precariously on top of the piano!

Towards the end of his life Harry painted less die to ill health but remained an active figure in the area. He died in 1985 but left a legacy of excellent paintings, many featuring this area.

Harry Rutherford was a talented artist and a man of great humour and gregariousness. Although his career often took him away from this area, he always returned to his northern roots and he was a familiar figure in Hyde. The Clarendon public house was his "local" and many of the regulars there featured in his paintings. He had a simple philosophy of life summed up in the phrase "Thou shalt be interesting".

Harry Rutherford is sadly missed. Tameside is fortunate that much of its recent history was recorded by this talented artist. Many of his most popular works are of local scenes.

He loved to sketch ordinary people and his favourite party trick was to draw someone's likeness whilst keeping the paper and pencil in his pocket.

Harry's painting "Saturday Afternoon", now called "Northern Saturday" depicting Hyde town centre, is arguably his most famous. It was acquired by Hyde Corporation in 1948. Harry is also remembered for the impressive mural depicting scenes of the town that he painted in Hyde Town Hall for the Festival of Britain in 1951.

Harry loved to use his familiar North West surroundings as inspiration for his paintings and, although of local scenes, these works became of national importance and much sought after.

Anyone who looks at Harry's painting "Portrait of the Artist with Toothache", a clever self-parody of a personally painful situation, must recognise not only a talented artist but also a man with a great sense of humour, who despite his success remained very much a man of the people. 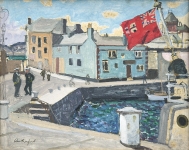