John Alvaro Caldas was born in Rusholme, Manchester in 1934. He showed an early talent for painting and drawing but due to difficult circumstances chose to become a dancer, moving to London in 1952.

He taught Tango and Latin American dance and had a successful stage career in the West End. John left the theatre to play the drums professionally in and around the Manchester Jazz scene from the late fifties to the mid sixties before settling once more in London.

Self taught in everything he did, John became an accomplished artist through hard work and practice. Throughout the rest of his life, he produced a large body of paintings and drawings of a consistently high technical standard and of an extraordinary intensity. He was acutely aware of Ruskin's ideas on forgetting the self when making art and wrote of the pitfalls of style, self-consciousness and the temptation as an artist to be a purveyor of meaning which he knew would lead to failure.

John's rather modest commercial success was due, in part, to the difficulty in finding a commercial gallery which viewed his work as more than just a commodity and his own refusal to become a career artist. Nevertheless, he received good reviews for his few solo exhibitions in London.

His work cannot be pigeonholed. One is occasionally reminded of Edvard Munch or Rainer Fetting; perhaps Theodore Major.

"But clearly Caldas knows here exactly what he is doing, and is undeniably his own man". John Russell Taylor The Times. 27 Sep. 1983.

"These images are as hard-won and authentic as any Richard Morphet selected and wrote about in the catalogue to his exhibition "Traditional Method and Subject in British Art" at the Tate in 1984 Phillip Ward Green, "Arts Review". 25th Sep 1987.

" I have my life, my living, my ideas, beliefs, opinions, obsessions, with command over my materials, with control over the task of the least, with my own consciousness which gives a reality to external reality so what an army of teachers?? And the idea of self- taught becomes meaningless. 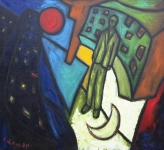 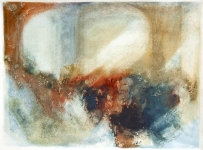 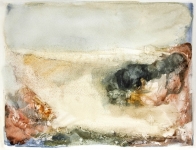 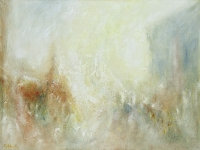