Patrica Gerrard was born on 4th June 1935, she was the daughter of Frank and Lilian Gerrard. They lived in Mottram-in-Longdendale in Cheshire and it was here that Pat was to meet L.S. Lowry as a child when her father fitted a lavatory in his village home in Mottram. Lowry later spotted potential in her work and encouraged the youngster to attend Manchester Art School and then London University. Over the years Pat and her husband Brian Cooke would spend a lot of time with Lowry visiting many parts of the UK and Ireland, their final trip together was in 1970.

Harold Wilson hung some of her comic portrayals of Liverpool's characters and back alleys at 10 Downing Street during his time as Prime Minister.

In 1951 Pat attended The Manchester Regional College of Art and went on to study at The Slade School of Fine Art in London. In 1965 she became a freelance artist and had her first one women show in 1958 at The Hyde Festival Theatre. Further exhibitions followed including Manchester Library in 1960, The Heineken Gallery in Amsterdam in 1970 and Salford Art Gallery in 1977.
Her work is now in numerous public and private collections and is highly sought after.
Pat, also famed for intricate drawings of Cheshire life, held exhibitions throughout the world.

She moved to Knutsford in 1965 with author husband Brian and was a popular figure in the town and neighbouring Mobberley. 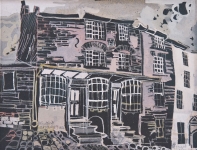