Brian Bysouth was born in London in October 1936 and his mother, a fashion artist, encouraged him to draw from an early age. After winning an art scholarship to the Willesden School of Art, he left at 18 to complete his National Service in the RAF.

After returning to school, he realised the only way to make a living was to become a commercial artist and joined an agency called Downtons, becoming interested in its film department. His first poster was for Tiger Bay (1959) and, in between general illustrative duties, he worked on the campaigns for the Bond films Dr. No (1962) and From Russia With Love (1963), starting his long association with the series.

He went freelance in the early 70s, working with David Judd Associates and doing all kind of illustrative advertising work (including posters for British Airways, Yorkie bars, Halls Brewery and Quaker cereal boxes) as well as film poster design. After setting up his own agency, Bysouth and Hayter Associates, in the late 70s - during which time he created the posters for Raiders of The Lost Ark and For Your Eyes Only - he joined the FEREF agency in 1983. As some of their biggest clients were major film companies (including Twentieth Century-Fox, Warner Brothers and UIP), Bysouth produced a lot of film posters as well as painting video covers, film campaign books and promotional brochures for the likes of the Cannes Film Festival. He also produced a portrait of L.S. Lowry for Philip Clayton-Thompson's BBC documentary - L.S. Lowry - The Industrial Artist. As computers became more accessible, Bysouth taught himself how to use Photoshop and moved towards being an art director though he created the cover art for Paramount's VHS releases of Star Trek and its various spin-offs.

The last painting Bysouth did for the Bond series The Living Daylights (1987), as all those since based been photographic (he said, in interview, that Licence To Kill (1989) suffered with a very bland, ordinary, photo montage which sadly marked the demise of the painted James Bond Poster). The last Bond poster he was involved with was The World Is Not Enough (1999) which gained notoriety for the fact that Sophie Marceau's bust size was increased.
Now retired, Bysouth still paints occasionally. 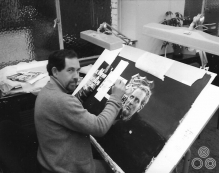 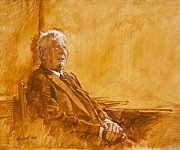