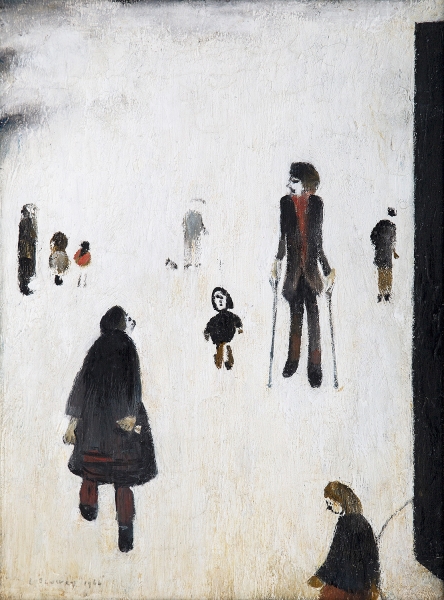 This painting was reproduced as a 100 edition signed and numbered limited edition print.

Looking at Lowry's Figures in a Park, one's mind is immediately drawn to one of his most famous and recognisable works, The Cripples (1949, The Lowry, Salford). This painting stands as a marker within Lowry's expansive oeuvre - and for many remains the touchstone against which his many figurative compositions are compared. Unlike the unidentifiable characters that populate many of his early industrial scenes here the artist turns with close analytical observation to the people that inhabit them; people that he met or observed during his daily rounds as a rent collector in the city, many of whom were relegated to the fringes of society. These so called 'down and outs' took particular prominence from the late 1940s onwards, with the lame and the disfigured providing a fascination to the artist. Lowry never flinched from the reality of those who had been dealt a poor hand in life - whether crippled at birth, or maimed during active service; those sleeping rough on walls or park benches, or victims of the industrial activity that brought so many to the city. But, unlike the assumption so often made that Lowry looked down on these outsiders, rather he acknowledged the role that they played in the makeup of the local society - they are part of the world that Lowry aimed to bring to notice, and without them his work loses its veracity and sense of social understanding.

Figures in a Park, as in The Cripples, is not awash with sentiment, but instead draws from first hand observation. Indeed, when his friend, the artist David Carr doubted that Lowry could have really seen all these 'characters' Lowry persuaded Carr to drive with him from Piccadilly Gardens in Manchester to Rochdale, pointing out 101 such memorable figures en route. It was with these later figurative compositions that one of Lowry's important patrons Monty Bloom was so particularly fascinated, leading him to acquire the present work during the mid-1960s. By this period the landscape had all but disappeared into the thick, flake white background (in the present work we see hints of the building far right which provide some architectural setting). Instead it is the people that dominate the scene and to whom our eye is drawn. Less populated than The Cripples it results in a further sense of the isolation inflicted upon these subjects; the social detritus of the post-industrial cityscape. Yet there is no sadness. Instead they stand facing the viewer, challenging the ideas perhaps immediately springing to mind, and force us to notice them - to acknowledge them and to further investigate the stories that they have to tell. These paintings are among the most personal executed by Lowry throughout the course of his career and award a very close insight into his understanding of his immediate surroundings and the role that he, as artist and observer, had to play within it.