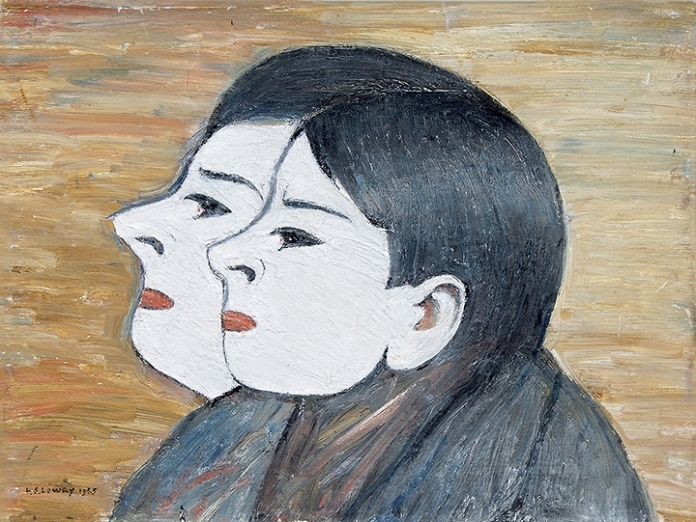 A gift from L.S. Lowry to Carol Ann Lowry.

In addition to this work, Lowry painted an oil sketch of the same title (Estate of L.S. Lowry, The Lowry, Salford), and about this picture Michael Howard wrote, 'The two profiles join into one fractured personality, possibly representing the young boy within the old man, whose features are those of the artist'. He continues, 'Lowry was a man of many aspects, only some of which he presented to a wider public. Little wonder, then, like Rossetti ('It's all in Rossetti', he used to say), he was haunted by the familiar gothic notion of the Doppelgor double. We see the image in his grotesque self-portraits, his alter egos (The Cripples, 1949), his depiction of doubles (Two Brothers, 1960), and the faces and numerous figures that appear to emerge from the silhouetted forms of other figures.

His sketches and the resulting finished works are evidence of the artist's obsession with the mask, with double identity, and the conflict between public and private' (M. Howard, Lowry: A Visionary Artist, Salford, 2000, p. 19