Laurence Stephen Lowry was born in Manchester in November 1887, the only child of Irish-born R S Lowry and Elizabeth Lowry (née Hobson). He attended a local school in Victoria Park, but took private lessons from William Fitz, before starting work as a clerk for a firm of chartered accountants in 1904.

From 1905-1915 he attended drawing and painting classes at the Municipal College of Art (later Manchester College of Art, and now part of Manchester Metropolitan University), where he was tutored by Adolphe Valette. He moved to Pendlebury in Salford with his parents in 1909, where he was to live for nearly 40 years. During this time he attended art classes at Salford School of Art, developing an interest in the urban and industrial landscape.

He exhibited with the Manchester Academy of Fine Arts from 1919, as well as entering paintings in the Paris Salon. By the early 1930s he was exhibiting at the Royal Academy in London. He was awarded an honorary MA at Manchester University in 1945, and Doctor of Letters in 1961, elected to the Royal Academy in 1962, and given freedom of the City of Salford in 1965 - many other honours followed later. He lived in Mottram until he died in 1976.

L.S. Lowry is unquestionably one of the most celebrated British artists and his unique contribution to recording the period, culture and landscape of the industrial north is without parallel. His work is a most distinctive and comprehensive record of the pre- and post World War Two northern industrial town. Many people associate Lowry with "Matchstick men" which became virtually his trademark, but he also produced a large number of empty landscapes and seascapes which are now recognised as masterpieces in their own right. Later in his life he concentrated on producing paintings of figures either singly or in groups, invariably against a white background.

He also produced thousands of pencil drawings during his lifetime, these are now very collectable and the best ones are incredibly detailed.

Lowry's status as one of the major British artists of the 20th Century was reinforced when the painting "Going to the Match" was sold at Auction for a record £1.9 million. This record was broken in 2007 when "Good Friday Daisy Nook" sold for £3.8 million and again in 20i1 when The Football Match and Piccadilly Circus each sold for £5.6 million. Classic Lowry oils now consistently sell for more than £1 million. The Lowry Centre in Salford Quays, Manchester now holds a major collection of his work.

Tate Britain iheld a major exhibition of his work in June 2013 entitled Lowry and the Painting of Modern Life. This exhibition confirmed his position as one of the most important British artists of the 20th Century.

1887
Laurence Stephen Lowry is born in Stretford, Manchester to middle class parents
Robert Lowry, a clerk, and his wife Elizabeth.

1898
The Lowry family move to the respectable leafy neighbourhood of Victoria Park. Home
to Manchester's intelligentsia, citizens include artist Ford Madox Brown and the
Pankhurst family.

1904
Lowry becomes a clerk in the firm of Thos. Aldred & Son, Chartered Accountants in
Manchester.

1905
Lowry attends drawing and painting classes at the Municipal College of Art,
Manchester, where he studied under the newly appointed French tutor Adolphe
Valette: I cannot over-estimate the effect on me at the time of the coming into this
drab city of Adolphe Valette, full of the French Impressionists, aware of everything
that was going on in Paris. He had a freshness and a breadth of experience that
exhilarated his students.1907
Lowry works as a claims clerk with the General Accident, Fire & Life Assurance
Corporation in Manchester. He begins private art classes with the American portrait
painter William Fritz.
Sees a large exhibition of Impressionist Paintings in Manchester including works by
Monet, Morisot, Pissarro, Renoir, Degas and Manet.

1909
Forced by financial circumstances, the Lowry family move from the relative opulence
of Victoria Park to the industrial area of Station Road, Pendlebury in Salford. For the
first time Lowry is able to walk from his home and encounter crowded streets
dominated by cotton mills or coal mines, or explore open countryside or farmland
around Swinton and Clifton.
Lowry begins part time life drawing classes at Salford School of Art.

1910
Lowry is made redundant by the General Accident, Fire & Life Assurance Corporation.
He is employed as a rent collector and clerk by the Pall Mall Property Company, Ltd,
collecting rents from many of the inner city districts - a job he continues until his
retirement in 1952.
Lowry sees the play Hindle Wakes by Stanley Houghton. A gritty working class story
set in the Lancashire town of Hindle, Lowry recalls this being the first time he saw
beauty in the industrial environment.

1921
Exhibition of Pictures by Tom H. Brown, Laurence Stephen Lowry, Roland Thomasson
held at the offices of architect Rowland Thomasson at 87 Mosely Street Manchester. In
his first public exhibition, Lowry exhibits twenty-five oils and two pastels, including
Coming Out of School priced £10 10s, A Hawker's Cart £10 10s and Bad News £18 18s.
None of Lowry's pictures sell, but it attracts attention from the press.

1928 - 1938
Lowry regularly exhibits at the Paris Salon d'Automne and the Artistes Francais.

1934
Elected a member of the Royal Society of British Artists.
Exhibits alongside Lucien Pissarro, Stanley Spencer and Walter Sickert at the Royal
Museum and Art Galleries, Salford.

1939
First solo exhibition in London at Alex Reid & Lefevre Gallery. The show attracts a large
number of reviews in the national press and a large number of sales. In the
accompanying exhibition catalogue, the critic Eric Newton writes Like Cezanne he has
gone straight to lifehis only concern as an artist is to translate his attitude to it
into paint. He belongs to no school, but he may ultimately be the founder of one.


The Tate Gallery purchase Dwellings, Orsdall Lane, Salford 1927 for £15. Lowry is so
delighted with the acquisition he donates his preliminary drawing for the work to the
gallery as a gift.
Death of mother Elizabeth.
Gives a talk to the Artists' International Association titled 'Painting in Pendlebury'.

1940
During World War II works as a firewatcher on the roofs of Manchester's large
department stores, giving him aerial views of the city much used in his paintings.

1945
Paintings by L. S. Lowry, Lefevre Gallery, London. Almost a sell-out, the show elicits a
barrage of criticism in the national press. The Manchester Guardian review, Any
doubts London may have had about Mr. Lowry's stature among contemporary painters
should be dispelled by the present exhibition. Here is a completely independent artist
with a subject matter of his own and a style which has nothing to do with contemporary
fashion, and will therefore, not easily go out of fashion. Strange as is his vision of
industrial Lancashire, it is authentic.

1947
The first reproduction of Lowry's work is released. Punch and Judy 1947 is produced
on cheap post-war paper in a large edition of 6,000 and sold modestly for about £3.

1948
Leaves Salford and after a six month stay in Swinton, moves to Mottram in Longendale
in Cheshire near the Pennine moors. Mottram was not an industrial area and Lowry
later made great claims to dislike both his house and area.
Eric Newton gives a radio talk on Lowry for the BBC Home Service (now Radio 4).

1949
Exhibits alongside John Minton, Michael Rothenstein, Julian Trevelyn, Fred Uhlman
and Carel Weight at the Artist's International Association.
Coming out of School 1927 is presented to the Duveen Paintings Fund. Inaugurated by
Lord Duveen to purchase works by contemporary British artists for presentation to
museums and touring exhibitions.

1950
Exhibits in Painters' Progress: The Live's Work In Brief of some Living British Painters,
Whitechapel Art Gallery, London.
Commissioned by the Arts Council to produce a large painting for the Festival of
Britain exhibition 60 Paintings for 51. Lowry produces Industrial Landscape: River
Scene, 1950 (collection New Walk Gallery, Leicester). The exhibition is organised to
encourage public collections to purchase works that reflect the British way of life.

1951
Retrospective Exhibition of Works by L. S. Lowry, MA, RBA, Art Gallery, Salford. The
Manchester Guardian sum up Lowry's success Lowry is now universally considered to
be a real minor artist.
1952
Commissioned by the Medical Committee of Ancoats Hospital in memory of the late
surgeon Peter McEvedy. In Ancoats Hospital Outpatient's Hall 1952, Lowry chooses to
depict the inhabitants of the waiting room rather than the exterior of the hospital.
The first monograph on the artist The Discovery of L. S. Lowry by Maurice Collis is
published. Here Lowry is promoted as one of the originals of modern art, a native
genius whose work lay within a tradition of the eccentric outsider.
Lowry retires with a full pension from The Pall Mall Property Company Ltd.
Commercially successful and having more freedom to travel, he spends time in the
North East and paints in Wales and Cornwall.

1965
Receives the Freedom of the City of Salford.

1967
Coming out of School 1927 is reproduced on a postage stamp by the Post Office.

1976
Lowry dies on 23 February at Woods Hospital, Glossop, aged 88, following an attack of
pneumonia.
L. S. Lowry R. A., The Royal Academy of Arts, London. This exhibition featured 328
works, the largest to date. 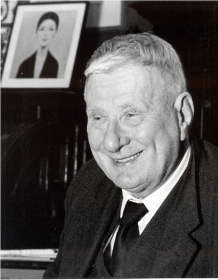 A Smiling Figure with Hands Clasped 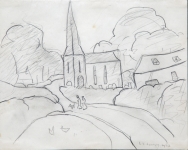 Head of a Woman with Side Buns

In the National Gallery, One Sunday Afternoon 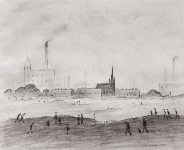 Life Drawing of a Man

Man Fallen Down a Hole

Man Looking Out to Sea 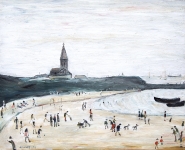 On The Canal Clifton

Portrait of a Woman

Study For The River Irwell

The Ferry Boat at Knott End 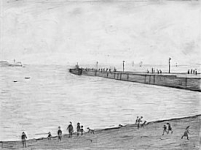 The Ferry Slip at Knott End on Sea

The Half Witted Child