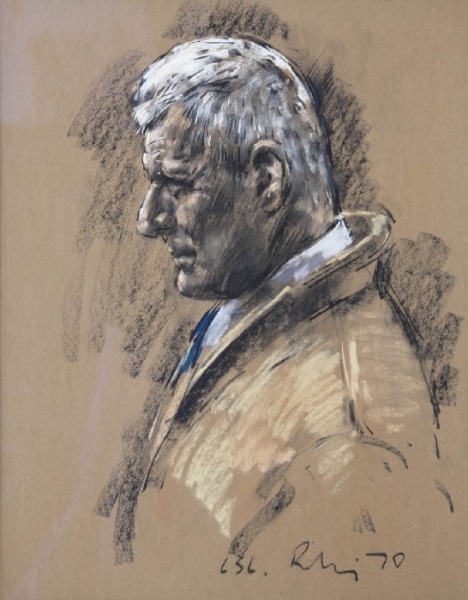 Original works by Harold Riley featuring Lowry are rare. This wonderful pastel shows L.S. Lowry in profile and was drawn by Harold Riley in 1970 when Lowry was 82. It was last sold 20 years ago for £3,000, a high price considering that you could buy a fairly decent original Lowry drawing for this price at the time.

Harold Riley's friendship with L.S. Lowry is well documented. He first came to Lowry's attention when he was a pupil at Salford Grammar School. They stayed in touch whilst Riley studied at the Slade in London and saw each other frequently during the 1960s. Lowry probably saw Riley as his protégé and hoped he would continue to record the changing face of Salford in the second half of the twentieth century. He did this to some extent before going on to achieve great commercial success as a result of painting portraits of Popes, royalty, politicians and sporting personalities.

Riley's paintings and drawings of Salford and Manchester from the 1960s and 70s are now very sought after.