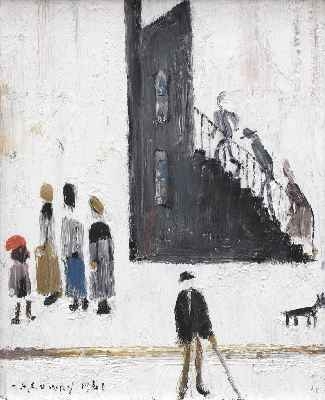 The Artist
Grove Leigh Galleries
Private Collection, purchased from the above in the 1970s

The theme of loneliness within Lowry's work is a much documented and discussed topic of the artist's output from the late 1950s and early '60s, as in this painting, typically centring on the characters that dominate the scenes that he created. Yet here, in The Rent Collector Lowry brilliantly applies this same sense of isolation and foreboding to a building, which stands, like the man immediately before it, alone. This figure is almost certainly Lowry himself. Painted at a period when the artist had shifted his focus from the architectural setting to the figures that populated them, the work displays a lone building standing tall amid the thickened white smog of the street - a composition landscape, but one in which the artist has gone one step further through the very personification of the bricks and mortar. This is a building that like the man in the immediate foreground stands alone, the steep steps mirroring the support provided by the subject's cane.
The tall black monolithic form draws comparison to the number of tall church spires that had fascinated him from the 1920s onwards in his depictions of the bulky exterior of St Augustine's in Pendlebury - here now a steeple for the everyday and not just the Sunday folk - or the tall pillars rising ominously from the sea in his intriguing series of 'self portraits' of the 1960s. This architectural construct is at once familiar, appearing in varying forms in other paintings by the artist, each time adapted and altered to fit the specific requirements of the composition. The aforementioned steps to the right of the building in particular seem familiar, and indeed were a popular reoccurring artistic theme within Lowry's oeuvre. Much like the gateways that he would return to time and again, they formed an important architectural component of Lowry's visual language.
Lowry's paintings always include movement or people on the go, and nothing suggests movement like steps. They provided a location for meetings and gossip - a place for locals to congregate in groups throughout the day. It is to the profile of this shop building that the present composition bears a striking similarity, adapted in typical Lowry fashion to emphasise the height of the building, with the tall, elongated windows surrounded by the smoke-blackened bricks. These monotone colours are wonderfully offset by the flashes of bright red and blue that draw the viewer's eye across the composition, and along past the motor car disappearing into the horizon beyond.

This small painting is undoubtedly a study for a larger painting of the same subject painted in 1963. This later work, entitled A House features all the same elements and sold for £329,000 in June 2015.