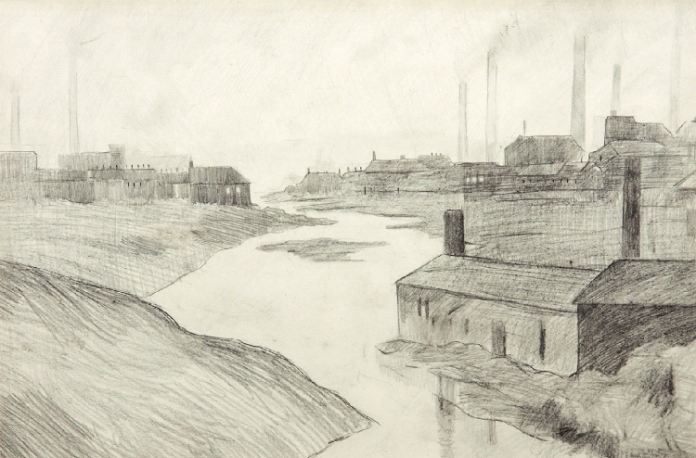 L.S. Lowry The Centenary Exhibition, Salford Art Gallery in association with The South Bank Board, 1987, fig 2 (not exhibited).
There are a number of drawings of this subject which was a key formative image in the evolution of the artist's industrial vocabulary. An oil painting of an imaginary view based on these drawings entitled " River Scene" is in the City of Glasgow collection. This oil is illustrated in M. Leber and J. Sandling (Eds.) L.S. Lowry, Oxford and Salford Art Gallery, 1987, no 20, pl 21.
This drawing was selected for the Salford L.S. Lowry Centenary Exhibition in 1987 and was reproduced on page 1 in the catalogue but was subsequently exchanged for Salford's own drawing of the same view.

The River Irwell winds through Salford, with a particularly large bend at the Adelphi, near Peel Park. Lowry sketched regularly in this area and the river appears in many of his works. The Irwell was often flooded, as Lowry shows in this drawing. Such scenes may have been the inspiration for his later industrial paintings where lakes or flooded areas feature in the midst of a desolate urban landscape.

Study for the River Irwell comes from a collection 17 Lowry paintings and drawings bought directly from the artist by his friends, Lawrence and Daphne Ives. The collection was sold at Christies in November 2000 and sold for £450,000.

Lawrence and Daphne Ives moved to Mottram-in-Longdendale, where L.S. Lowry had lived at The Elms since 1948. In 1959 a chance meeting with a local resident alerted them to the presence of an artist in the village: There's a chap in the Village who's a right take-on. This chap does a bit of drawing and painting but they're not up to much. He passes under the name of Lowry. The art-loving couple were delighted by the unexpected news and Lawrence Ives recalls, The sun shone, angels flew around the house and joy reigned all around. That evening my wife set off to The Elms as the advance guard, she left around 8.30pm and came back after midnight. Incredible, fascinating, a lovely man Daphne said,It's your turn tonight. So I went and thus began a friendship that lasted until Lowry died.