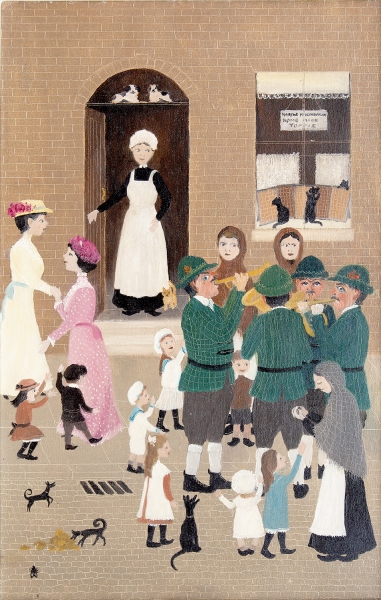 The following had-written story label is on reverse of the painting:
The German Band played outside Martha Higginbottom's little sweet shop and it was Saturday Morning and, George and I were looking forward to having a halfpenny worth of Linseed Toffee, but we really wanted to buy Egg & Milk, but mother wouldn't allow us to eat it, meowing Martha's four cats licked The egg & milk - They didn't like the taste of Linseed, Miss Carter (who wore pink) rushed across the road to mother and said Oh Jane, do I look pale? I've just seen Mr Taylor (the Bank Manager) and he said, My Dear Come and sit down and I felt all of a flutter and she tried to step forward but Willie Murgatroyd was standing with his shoes on the hem of her spotted muslin dress and the year was 1908.